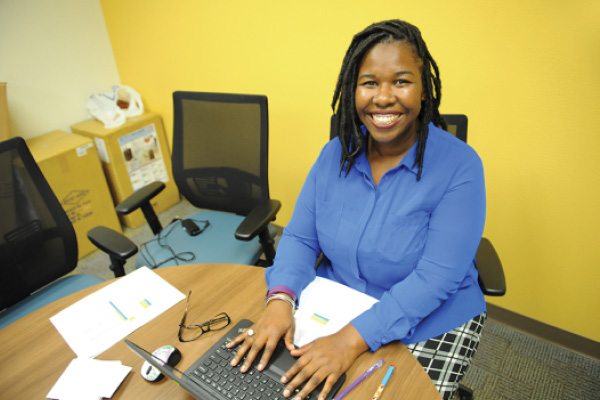 The design for a stunning new school opening today in Orlando’s Parramore neighborhood got its start on a napkin in New York City.

Architects for the new Orange County school were touring public “community schools” in New York that had a track record of helping children in poverty succeed and thrive with support from community partners such as the Children’s Aid Society. The community schools offered health care, enrichment programs and other services for students.

The architects were looking for design ideas for a school to be opened in Parramore and were excited by what they saw, said Nancy Ellis, director of the Center for Community Partnerships and a graduate of the Doctoral Program in Public Affairs at the University of Central Florida. “By lunch they were making sketches on what was handy in one of the school’s cafeteria.”

Ellis and colleagues at the College of Health and Public Affairs, Children’s Home Society of Florida and True Health had already partnered with Orange County Public Schools to develop a community school at Evans High School in Pine Hills that began in 2010.

The high school was seeing a steady increase in its graduation rate and the future seemed promising, so Orange County School Superintendent Barbara Jenkins wanted the new school in Parramore to be a community school too, said Ellis.

Both trips and ongoing conversations among the partners have helped the school district reach its milestone today of launching the new OCPS Academic Center for Excellence as a community school for some 1,200 students and their families and community.

The school will serve not only Parramore but also the Callahan and Holden Heights neighborhoods, said school board District 5 representative Kate Gordon at an Aug. 9 sneak peek of the school.

OCPS ACE is formally known as a Community Partnership School, the name coined by UCF and Children’s Home Society of Florida for the school model developed at Evans High.

All community schools foster strong partnerships to support the well-being of students and their families and communities, but the programs and services vary depending on the needs, said Amy Ellis, assistant director of the Center for Community Schools at UCF.

The Community Partnership Schools™ model is now recognized as a national community school model by the Coalition for Community Schools in Washington.

The Florida Legislature appropriated more than $4 million dollars during the past four years for the development of Community Partnership Schools across the state.

Currently, eight public schools in Florida have become Community Partnership Schools with state support, including Evans and OCPS ACE in Orlando and schools in Pensacola, Jacksonville, Tampa, Holiday and Cocoa. Five others are implementing the Community Partnership Schools™ model with support from their local community, and another four are in the emerging phase, said Amy Ellis.

Early-outcomes data is impressive. Evans’s graduation rate has increased from 64 percent in 2011 to 88 percent in 2017. C.A. Weis Elementary School in Pensacola began offering behavioral health services when it became a Community Partnership School in 2015. Since then more than 100 children have been referred to behavioral health care and 81 new cases have been opened, according to school director John Sherman. Student referrals dropped 43 percent and suspensions dropped 50 percent in the first year.

Sherman’s position as director is one of four staff positions found at all Community Partnership Schools – a director, an after-school coordinator, a health programs’ coordinator and a parent resource coordinator. The positions are partially supported with legislative funding.

Shannon Currie has been on board as the Community Partnership School director at OCPS ACE since last year. She is an employee of Children’s Home Society of Florida, works closely with the school principal, and receives training and technical support from the Center for Community Schools at UCF.

“It’s an amazing experience to be a partner and to understand what it takes to support a school holistically,” Currie said. “I’m doing what I love to do – to serve people. What I want them to know is that they have access to support. If they know that, then we’re doing our job.”