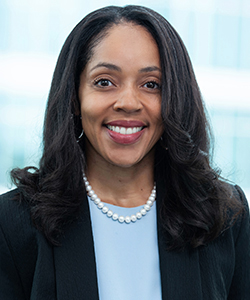 Aramis Ayala is an award-winning civil rights advocate, cancer survivor, and former Florida State Attorney who has dedicated her life to the pursuit of justice. As Florida’s first Black State Attorney and a fierce opponent of the death penalty, she made national headlines because of her commitment to criminal justice reform. Prior to running for office Aramis served as a homicide, major crimes, and special victims unit prosecutor. She has also held positions as an Assistant Public Defender and an adjunct professor of law at Florida A&M University School of Law. Aramis has appeared frequently on television as a legal analyst and served as the chairperson of the Citizens Police Review Board for the City of Orlando. She is a past president of several local and state bar associations and served as a Florida Bar Board of Governors Ex-Officio Member.