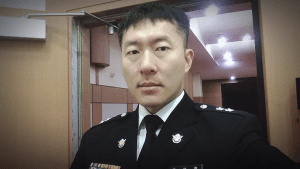 After a career of service with the South Korea Coast Guard, Hyun-do Hong, known as Chris Hong to his American friends, decided to continue his education at UCF.

Hong became an international scholar at the UCF Center for Public and Nonprofit Management, where he will spend the next two years studying emergency management and interning with the UCF Emergency Operations Center, earlier this year. His goal is to gain an international perspective on how disasters are handled, and to bring his newfound insight back home to his colleagues.

“The emergency management and homeland security program will be helpful for me to make better policies about counterterrorism,” Hong said. “Learning advanced policies in the U.S. will [enhance] my ability [to] teach government officials or students in the future.”

Hong has a background in counterterrorism through the South Korean military. He served as a naval officer in the late 1990s after graduating from the Korea Maritime and Ocean University with a bachelor’s degree in marine engineering in 1996. He later worked in the counterterrorism division of the South Korea Coast Guard, where he still serves as a senior inspector. In his current role, Hong supports the Ministry of Public Safety and Security by training and recruiting marine SWAT teams, creating policies and developing manuals on counterterrorism and disaster resilience.

“As international cooperation and conflict over the oceans increases, there is a growing need for international experts to respond these issues,” Hong said. “While studying at UCF, I can improve my English skills, make friends from different countries and understand their cultures, which will be useful to my public service career in the future.”

Hong chose UCF for its emergency management program, which boasts scholars such as program director and Associate Professor Claire Connolly Knox, and SPA Director and Professor Naim Kapucu. Once his tenure at UCF ends, Hong will return to the South Korea Coast Guard as an officer, preferably returning to the counterterrorism division or shifting to the international cooperation division. He hopes that the knowledge he gains at UCF will help the South Korean government to generate a more thorough policy for dealing with disasters – and help him advance in his career.

“With the achievements of the UCF faculty, I firmly believe that my studies in emergency management will give me not only challenging job opportunities, but the academic background and expertise to create a competitive edge in my career.”