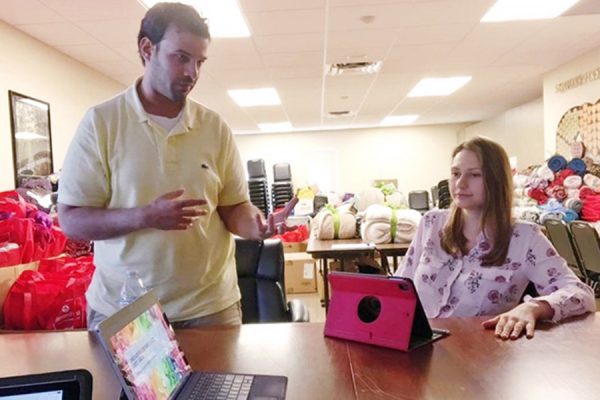 Eating lunch with others benefits the health of elderly Orange County residents, according to a study conducted by public affairs’ researchers at UCF.

The nonprofit Seniors First, which offers the Neighborhood Lunch program in Orange County, partnered with UCF to review its program and impact on participants.

Doctoral students Faisal Mohamidi and Safiya Prysmakova and Professor Su-I Hou and her research student group surveyed elderly residents participating in the program and spoke to several of its coordinators and leadership to compile its report.

Making sure at-risk elderly are healthy and socially engaged is important because the combination can help them live independently longer.

Mohamidi and Prysmakova concluded that healthy food behavior — particularly eating appealing, nutritious food and eating with others — has a positive impact on the overall health of seniors and their perceived quality of life.

Making sure at-risk elderly are healthy and socially engaged is important because the combination can help them live independently longer. That means preventing costly medical and social service needs that could be avoided. With a state population of 5.2 million senior citizens nationwide and 11.3 percent of them living in Orange County, programs like Seniors First matter.

“Seniors First and UCF have a longstanding partnership to collaborate on projects that help to build a better Central Florida community,” said Marsha Lorenz, president and CEO of the agency.

The Neighborhood Lunch program offers congregate meals — meaning they are served in group settings that encourage socialization and better health — five days a week. The program serves more than 93,000 meals at 14 lunch sites each year.

The program also offers transportation to its lunch sites, which operate in space donated by community partners at locations throughout Orange County, from Pine Hills to Winter Park.

The researchers surveyed more than 70 participants at two of the lunch sites. More than 90 percent of the participants reported feeling healthier, eating healthier, having an enjoyable experience, socializing and continuing to live independently as a result of the program, according to the research team.

The study participants’ average age was 77 years; 82 percent were female and 66 percent were Black/African American.

In addition, the research team interviewed Lorenz, the Neighborhood Lunch program director and the lunch site coordinators to gain their perspectives.

Twenty-five percent of the coordinators reported lack of transportation and lack of funding as challenges.

Another challenge for coordinators is offering food that’s appealing to seniors. The coordinators offered the following recommendations for meal sites:

In written comments, Lorenz said the agency will use the findings in future grant applications and to make program improvements.

“The suggestions regarding changes to the menu will help us improve client satisfaction and decrease food waste,” she wrote. “The extensive and comprehensive literature review also provided us with the most current information available on this subject.”

Hou supervised the students’ research as professor of public affairs and of health management and informatics at UCF. She also guided their review of literature on the elderly and food insecurity.

Mohamidi said the project taught him patience, exposed him to many different cultures and increased his appreciation for senior citizens. He even gained a few elderly friends along the way.

“It was a great experience and working with the elderly made it more special,” he said. “It’s like working with your grandparents; they are so sweet.”