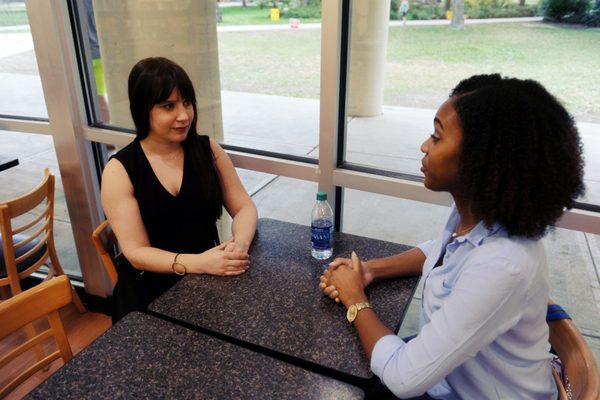 UCF students Jennifer Sanguiliano and Rachael Mack have found that interdisciplinary studies in public affairs and education are essential for learning about the communities around them.

UCF will advance interdisciplinary studies in these areas by bringing together academic programs in education and public affairs to help form a new college that will anchor the university’s emerging downtown campus.

The new college will include the Doctoral Program in Public Affairs, in which Sanguiliano and Mack are enrolled. The program is currently housed in the College of Health and Public Affairs.

Sanguiliano has worked for three years as a graduate assistant on a Federal Javits grant project called Project Elevate housed in the College of Education and Human Performance. Project Elevate focuses on gifted students in Title I schools, a close interest of Sanguiliano’s, a former middle-school history teacher, who also worked with gifted students.

“When I started in education, I realized I wanted to change schools’ [educational policy], but I couldn’t do that without teaching experience and public affairs knowledge,” she said.

This led the UCF alumna to return to UCF after four years of teaching and pursue her doctorate in public affairs in the public administration track. During her studies, Sanguiliano also has taken education electives to continue learning in both fields.

“I’ve seen a connection between the coursework and the communities that they are based in,” she said. “I’m sure my classmates are tired of hearing me talk about the education system, but I have found a connection in each course I’ve taken.”

Mack, a Central Florida native, earned her bachelor’s and master’s degree in social work at Florida State but knew in her heart that she wanted to return to her hometown to work and to encourage the youth.

“People always say ‘Life isn’t fair,’ and I agree,” Mack said. “I don’t think it’s fair that students have to go through loopholes, much like I did, to obtain a quality education. I also don’t think we have to accept life’s unfairness; we simply have to make efforts to be the change that we wish to see in the world.

Mack is currently applying to the Supporting High Needs Populations Certificate Program in the College of Education and Human Performance. Last summer, she took a course on critical issues in high needs populations and decided that working in the educational system would have the greatest impact in the communities around her.

In addition to her educational pursuits, Mack also has collaborated with Parramore Kidz Zone, UCF CREATE and a faculty member from the public affairs program to facilitate the creation of a digital storytelling project for the students. She also has established the Y.E.S. Girls Mentoring Group for high-school age students in the Orlando area to enhance the personal, academic, social and emotional development of young women.

“My passion in life has been to help people,” she said. “Between my social work, public affairs and education background, it’s all for the betterment of my community and the children.”

Sanguiliano and Mack said they were excited at UCF’s announcement of the downtown campus and that programs from the two colleges would be moving downtown to help form a new college.

“There is a benefit to merging everyone together,” Sanguiliano said. “Public affairs is a macro-subject and education is a micro-subject, so bringing them together is crucial to the future success of both fields.”

Mack also is supportive of the interdisciplinary approach of the downtown campus – a concept heavily stressed in the public affairs program.

“One thing they teach in the PAF program is the significance of being able to work with others and the importance of building partnerships,” Mack said.

Robyne Stevenson, interim program director for the Doctoral Program in Public Affairs, said Sanguiliano and Mack demonstrate the possibilities open for students as the program prepares to move downtown.

“These two students represent the broader implications of the interdisciplinary aspects of the public affairs program,” she said.

*Editor’s Note: The new college will begin operations on July 2, 2018, with some programs from the College of Health and Public Affairs, College of Education and Human Performance, and the College of Arts and Humanities anchoring the downtown campus. Programs will begin moving downtown in summer 2019, with the doors opening for students to attend classes in fall 2019.