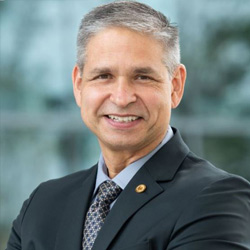 Dr. Ross Wolf holds a Doctorate degree in Higher Education Administration and Educational Leadership and a Master's degree in Public Administration. He has over thirty years of experience in higher education and over thirty years of experience as a law enforcement officer, where he has served as a member of patrol, criminal investigations, specialized patrol, and a plainclothes tactical unit. In addition to his work with police agencies throughout the United States, he has worked with the police in the Caribbean, the United Kingdom, Russia, Hong Kong, Saudi Arabia, Dubai, and Singapore.

Dr. Wolf serves on the International Association of Chiefs of Police (IACP) Police Administration Committee and the governing board of the International Managers of Police Academy and College Training (IMPACT) Section, and on the National Sheriffs' Association (NSA) Reserve Law Enforcement Officer Committee. He was awarded the United States Presidential “Daily Point of Light” Award, the National Sheriffs' Association “Medal of Merit,” and the Presidential “Lifetime Call to Service Award” for his work with volunteer and reserve policing.

As Interim Assistant Provost for UCF Downtown, Dr. Wolf is responsible as the provost's office representative for overall delivery of academic programs on this multi-institution and multi-college campus. He also promotes and implements new initiatives and structures at UCF Downtown by working closely with academic leaders, faculty, staff, and students to strengthen the academic infrastructure on the downtown campus.

Bachelor of Arts in Liberal Studies
University of Central Florida

Because of his interest and experience in policing, Dr. Wolf has focused his academic research on the administration, management, and training of police, including volunteer police. He has published two books and over thirty refereed articles and book chapters on campus law enforcement, police administration and management, reserve and volunteer policing, police use of force, tourism policing, and international policing. His research on has been featured by CNN, the Wall Street Journal, The Independent, and The Guardian. He has also been interviewed about volunteer policing by Fox 10 (Phoenix), and Univision, among other local stations. He has been a keynote speaker at numerous international professional conferences, and has provided training to the police in Dubai, St. Lucia, Aruba, Wales, England, and Russia.