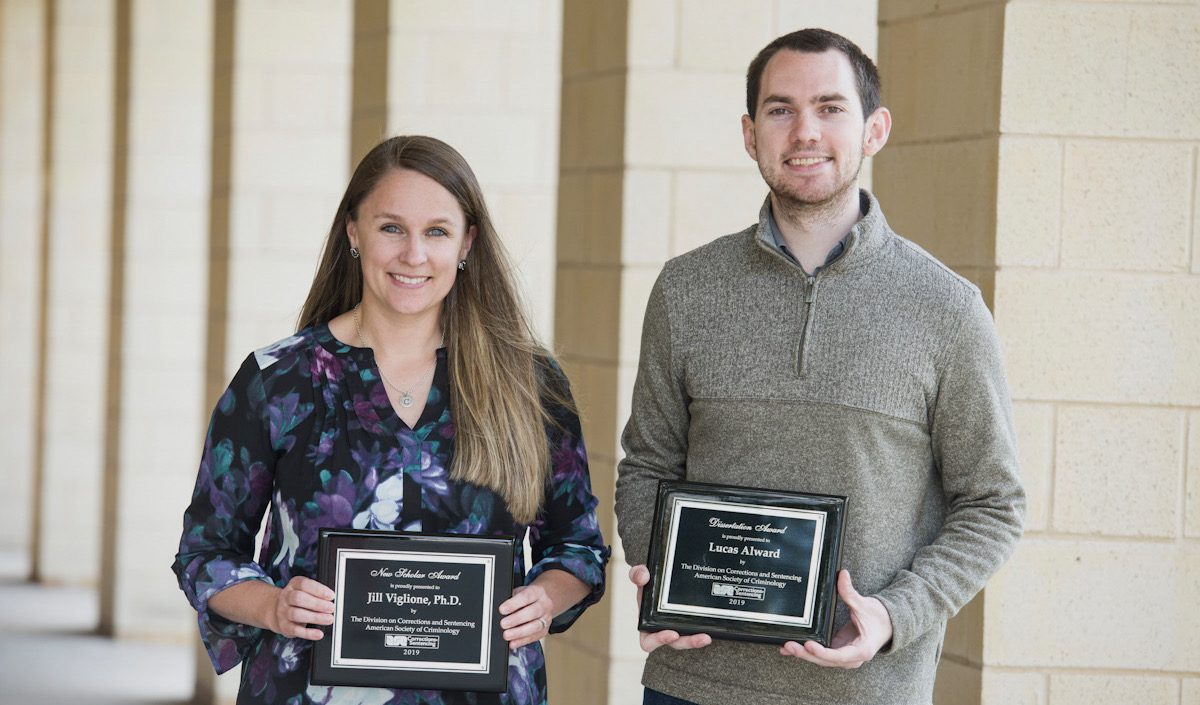 Criminal justice doctoral student Lucas Alward walked into Jill Viglione’s office with 15 research questions for his dissertation. Viglione, who is an assistant professor of criminal justice and Alward’s mentor and advisor, remembered her own long list at the start of her dissertation.

“She understood the importance of some back and forth to narrow my focus.” Alward says these conversations with Viglione speak to her ability to help him grow as a researcher.

According to Viglione, “It's easy to get lost, wanting to do all these different things in one project, especially as a doctoral student. So, we looked for ways this research translates to the field and why it's important. It's not just about reading books or writing articles. It is also thinking about what we can do to help practitioners and improve the criminal justice system.”

Alward says that kind of support, guidance and space to develop as a scholar helped to build on skills he will use throughout his career.

Soon to graduate in the first cohort of the criminal justice doctoral program, Alward is especially focused on the largest population in the criminal justice system — community corrections. With roughly 4.3 million people in America on probation or parole (more than double the number of people incarcerated), about 350,000 of these individuals return to jail or prison, often because of rule violations rather than new crimes.

It's not just about reading books or writing articles. It is also thinking about what we can do to help practitioners and improve the criminal justice system.

Alward’s research looks at ways to address these issues prevalent in community supervision. “Addressing noncompliance and reducing the number of people sent back to jail or prison can have a major impact, not just on the lives of offenders but on communities,” he says.

“Dr. Viglione offers a lot of opportunity to get involved at every stage of the research process,” says Alward. “And exposure to these stages builds valuable experience.”

In their most recent project, Alward and Viglione initially researched whether or not a training curriculum had an impact on recidivism rates in a probation agency. But in the early stages of their research, they realized there was a disconnect between what the agency thought was going on and what was actually happening.

In response to this very real-world research challenge, Alward conducted interviews of probation officers across the state of Florida as part of the team’s process evaluation.

“We wanted to really get at probation officers’ attitudes towards the curriculum and if they implemented the training curriculum in the way it was designed,” says Alward. “And I got to conduct most of these one-on-one interviews.”

Viglione says she emphasizes the exposure, engagement and communication of her students with agencies and community partners. “I think it really pushes them out of their comfort zone, but also gives them the opportunity to grow and see how what we're doing in the classroom applies in the real world.”

When reflecting on her own mentor, Viglione says Professor Faye Taxman’s “mentorship never ends. Even though I'm not her student anymore, she is still an active mentor in my life. I hope to do the same with Luke and my other students.”

In his final semester before graduating from the program, Alward is already talking about his role as a mentor. “Research is a true passion of mine and something I want to continue after I graduate. But I also want to give back the same opportunities I was given involving students in the research process — mentoring the next generation of scholars and practitioners.”