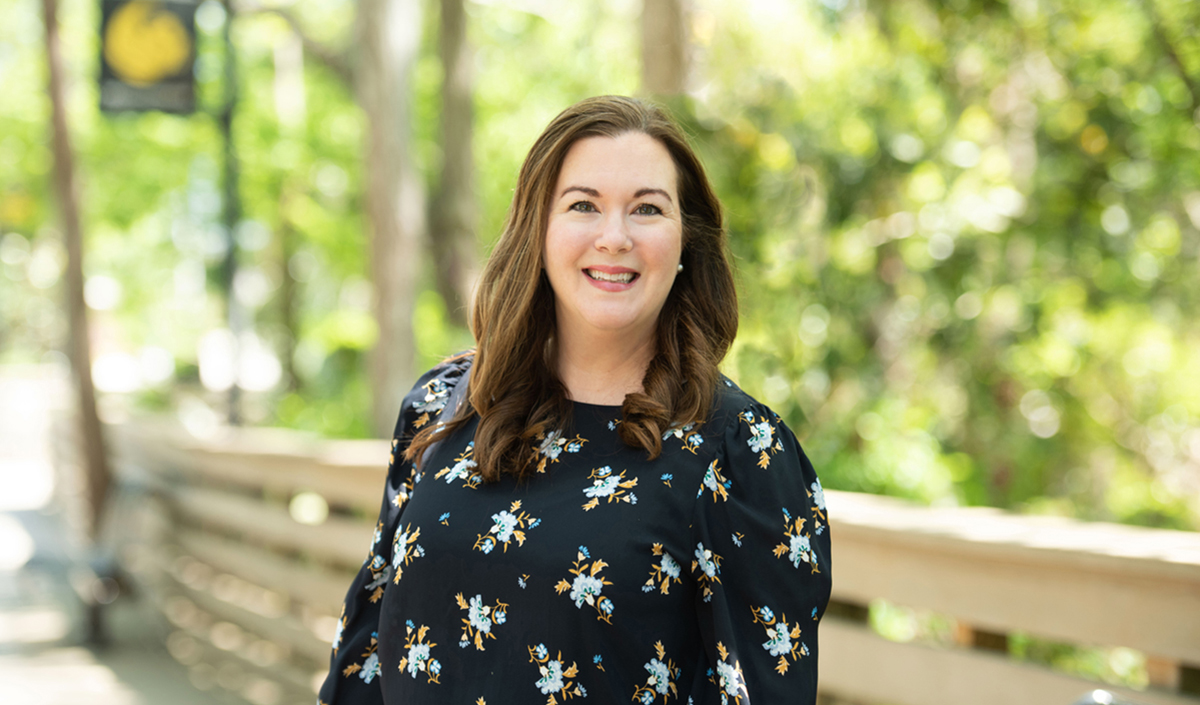 Claire Knox will be bringing a emergency management, environmental vulnerability and cultural competency perspective to the task force. (Photo by Amy Floyd)

Earlier this year, Claire Knox was invited to participate in a task force for the American Society for Public Administration, which is the premier association for the field. Knox, an associate professor of public administration and program coordinator for the emergency and crisis management master’s degree program, has been a member since she was in college.

According to Knox, it’s quite rare for a task force to be formed. An issue must cross multiple sections of the organization, such as emergency management or nonprofits, ethics and integrity in government or budget and finance. As the COVID-19 pandemic has affected everyone in every possible profession, the association created the task force in December, and the president sent out formal invitations to the ten members in February.

“I am honored to have been invited to serve on the Pandemic Task Force,” says Knox. “It is a humbling experience to be recognized as a leader in emergency management amongst my peers from around the world. Service on this task force is essential to not only connect scholarship with practice at all levels of government and across all sectors of our society in the U.S. and abroad, but also to facilitate conversations and document lessons learned.”
Although Knox will never know the exact reason why she was selected out of her colleagues in emergency management, one can guess it’s a combination of her professional experience, dedication to the field, position as a researcher and faculty member at UCF, and her network. “I’ve gone from student to board member to section chair to now providing service at the national level,” says Knox.

The rest of the task force spans disciplines within the broader public administration field, with Knox providing the emergency management, environmental vulnerability and cultural competency perspective.

The task force’s first step is hosting a panel during the association’s annual conference this month. The panel will feature international experts, who will talk about the lessons they’ve learned from the pandemic and how it’s affected their respective countries.

“The panel is an example of what’s really great about the task force. It’s not about us, the task force members. It’s about us being facilitators to bring together experts and scholars over a three-year term to be able to compile as much research, data and best practices as possible to be used by different levels of government in different countries,” says Knox.

While every disaster is unique, we can take some general lessons and apply them to future plans and policies. Often, we are not implementing these lessons at the organizational level, which can lead to increased vulnerability.

In addition to the panel, the group will be publishing articles in the organization’s quarterly newsletter, preparing a special issue in the discipline’s top journal Public Administration Review, hosting a monthly webinar series, and creating a book series. However, what Knox really wants to accomplish is an annual national survey of members to capture the scholarly activities of researchers (articles, grants, datasets) and lessons learned from the practitioners. “Since public administration consists of many subdisciplines who all are engaged with the pandemic at some level, I think it’s really important to get a foundation as to what’s happening among the academics and practitioners. The task force will document these activities as there might be pockets of impactful research or practice that’s happening around the U.S. and abroad,” says Knox.

With that information in hand, the task force can analyze areas where certain professions are struggling and then collaborate with practitioners in the respective fields to learn from one another. What makes the task force so impactful, in addition to the members’ networks, is that it includes both professors as well as practitioners. “It’s critical to have that connection between theory and practice,” says Knox.

Knox hopes that the conversations the group will facilitate, research they will gather and information they will share will help inform future local, state and national policies. A previous task force that focused on the effects of Hurricane Katrina analyzed aspects such as leadership, response efforts, transportation, infrastructure and ethics. Their results led to changes within the Federal Emergency Management Agency and local governments.

This opportunity to affect policy is another aspect of the task force that Knox is looking forward to, given her primary area of research deals with analyzing policies, plans and the language used to describe disasters. “While every disaster is unique, we can take some general lessons and apply them to future plans and policies. Often, we are not implementing these lessons at the organizational level, which can lead to increased vulnerability,” explains Knox.

Knox’s research spans decades and relies heavily upon language used to describe disasters as well as non-disasters. She’s one of only a few scholars in the field that uses after-action reports for her work. A recent article focused on compounding disasters and how that affects social media communication during the response and recovery phases. Knox is eager to see what underlying issues the team will find when analyzing the COVID-19 pandemic.

“These underlying issues are going to find their way to the surface during a disaster or crisis, and we can give light to them. Maybe one section of the American Society for Public Administration has focused on social equity issues during the pandemic, while another section focused on the financial burden facing local governments. Now we have a national platform to highlight and connect these and other issues when trying to respond to a pandemic,” says Knox. “I think there are some great success stories and lessons learned that we need to highlight and bring to the forefront for academics and practitioners.”

Knox joined UCF in 2010. She is also a member of UCF’s National Center for Integrated Coastal Research. Knox earned her doctorate in public administration from Florida State University, where she also received her master’s degree in public administration. Her bachelor’s degrees are in English and renewable and sustainable resources, both from the University of Louisiana at Lafayette.