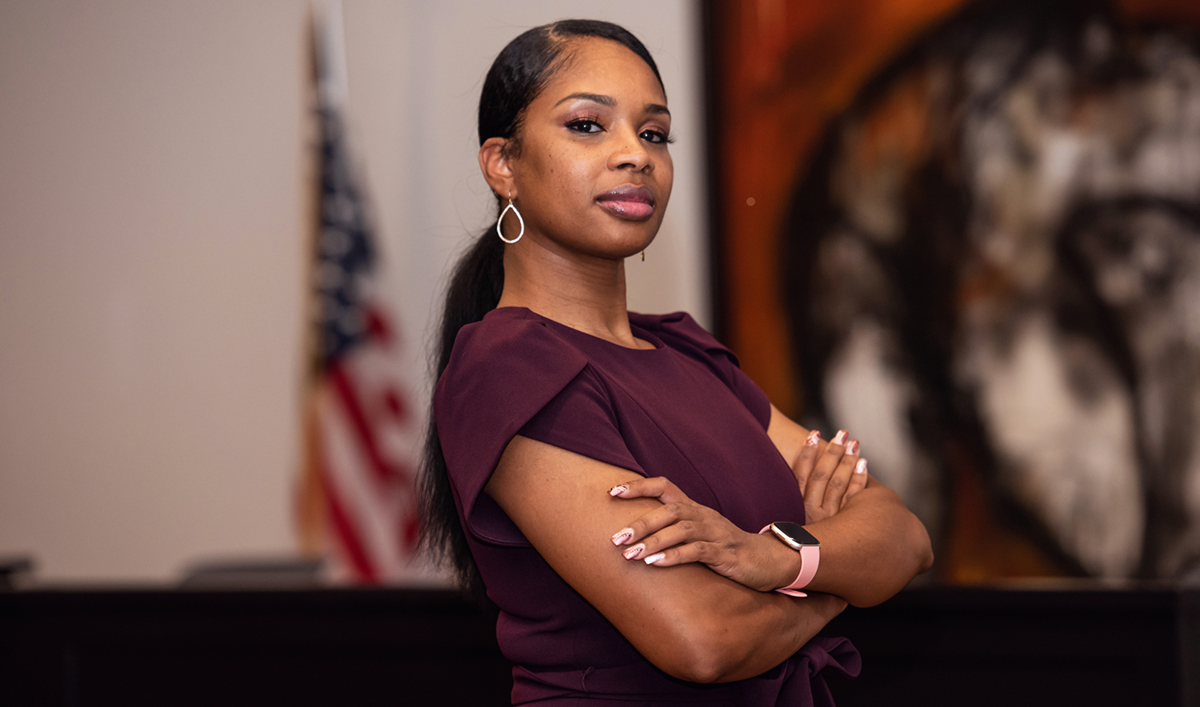 Shannon Waiters ‘21 began her UCF journey at eight-months pregnant. She already had one child and was in her late 30s. She had also just retired from 20 years of service in the Army as a senior intelligence analyst.

Waiters spent her career analyzing reports from service men and women in the field and turning them into assessments for higher-level commanders and government officials. She also did the reverse; she took orders and translated them for soldiers. “At one point in my career, I was creating briefings and assessments that went directly to the Secretary of Defense every single day,” she says.

Waiters is an example of the numerous nontraditional students that call UCF home. She graduated this spring with her bachelor’s degree in legal studies and is waiting to hear back from law schools with the hope of starting in the fall.

“My short-term goal is to enroll and graduate from law school. My long-term goal is to start my own consulting firm,” says Waiters. “I have such a passion for helping people.”

Although Waiters was set to attend college after high school and received numerous scholarships, after visiting a school for a tour, she decided attending a large university wasn’t right for her at the time. Her sister had recently joined the reserves, and after doing some research, she decided to join the Army instead.

It wasn’t until her career in the military was coming to a close and Waiters was commuting from Orlando to her last duty station in Tampa that she considered the possibility of being a full-time student.

Having learned all that she could from the intelligence field, Waiters was ready for a new challenge. Once she realized how substantial UCF’s offerings were and the institution’s ranking in higher education, she decided her next life journey, post-Army.

“I wanted a degree that when anybody in the world might look at it, they know that there was a lot behind it, that the professors and the school itself were prestigious. It wasn’t just that UCF is located here in Orlando. It’s that UCF is speaking for itself across the nation. I want my degree on the wall to say I earned it at UCF,” says Waiters.

It was official: She was going to focus on being a parent and a student.

She aced that challenge this past May, after an arguably difficult experience in the midst of a pandemic and having to care for two young children while attending online class, but Waiters pushed through because of her desire to attain her degree in legal studies.

“I like rules and understanding why we need them. We create rules to ensure that society can always function without chaos,” says Waiters. “Being a Black person in America, I was taught by my culture that rules are here to oppress us, but I want to change that narrative. I have this passion for law, and I want to teach people how the law can work for us.”

Waiters dreams of starting a consulting firm after she obtains her law degree because she wants to show others how lawyers can help them — or at least how to understand the law.

“I want to educate people before they get between a rock and a hard place,” she explains. “Some people aren’t aware of the benefits afforded to them simply because they don’t ask the right questions. I want to try and open people’s minds about when to go to a lawyer, not only when there’s a problem. I developed this passion while helping my father navigate the Veterans Affairs disability system. My goal is to help as many people as possible.”

I have this passion for law, and I want to teach people how the law can work for us.

Waiters admits that the biggest thing she struggled with as an older student in class was having to squash the impulse to be the other students’ mom. With two little kids at home, being an aunt and having spent a career watching over countless airmen, Marines, soldiers and sailors, Waiters first instinct was to parent.

“It was eye-opening. Instead of wanting to be that older classmate who thinks they know everything, I sat back and was a sponge. I listened. Their generation is learning at such a rapid pace, and I got to learn from them,” she says.

Shedding 20 years of perfecting her leadership style didn’t come overnight. Instead, she instituted a mantra for herself that she repeated as she walked from her car to class: “Remember that you’re not their parent. You’re here to learn.”

For other nontraditional students or veterans, Waiters has some advice. Implement time management and schedule a day of the week just for you, whether it’s used to catch up on homework so you can spend the weekend stress-free and with your children or just to get your hair and nails done.

She says to use all the benefits afforded to you, and this advice she points at her fellow veterans. UCF’s Veterans Academic Resource Center was a beacon of hope for Waiters during both her transition into civilian and college life as well as throughout her time in school. She even became a peer mentor. “The Veterans Academic Resource Center was instrumental in my success at UCF.”

Lastly, Waiters says to be a sponge walking in with a clean slate. “Like I taught myself: Don't think you know everything because you've been through some things. Be willing to learn, and be open to new concepts,” says Waiters.