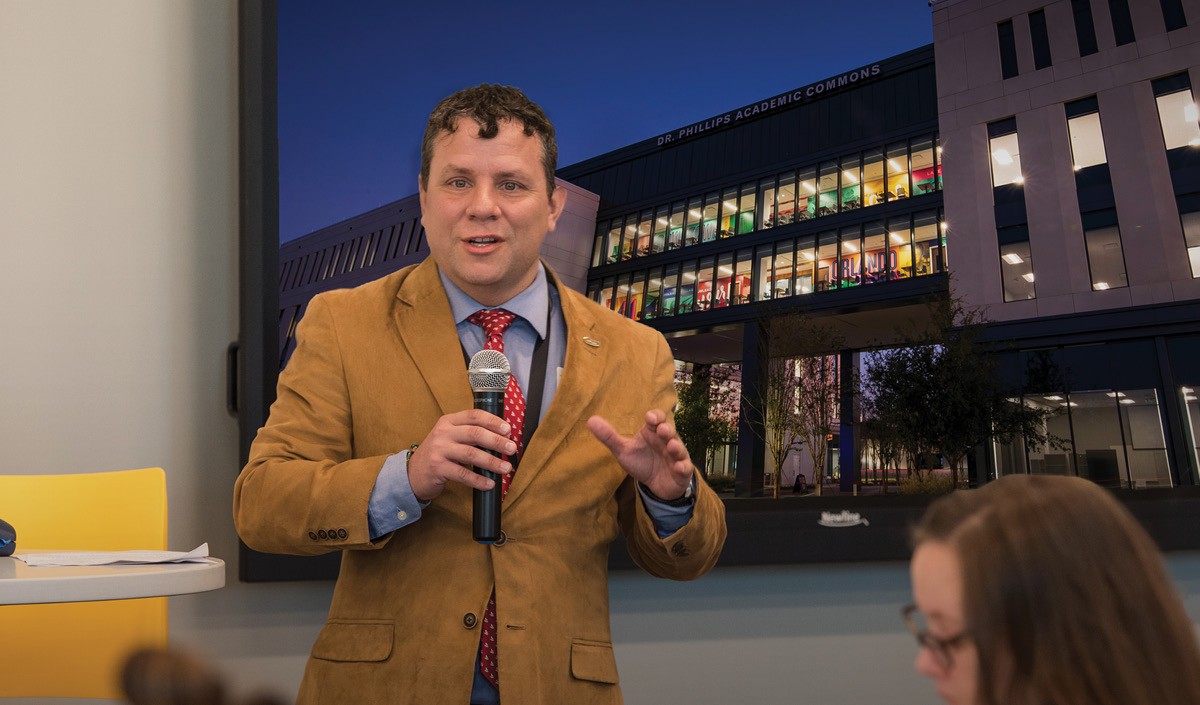 Bryer says the award is one of the most significant personal and professional recognitions he has received.

During a globally streamed ceremony at St. Catherine’s Church in Vilnius, Lithuania on December 29, Thomas Bryer, a professor of public administration, was honored by Gitanas Nauseda – President of the Republic of Lithuania – with a 2021 Global Lithuanian Award for contributions to scientific progress in the country.

Bryer’s award represents the culmination of multiple professional endeavors in Lithuania, including his leadership in the development of a dual-degree program between the UCF School of Public Administration and Kaunas University of Technology (KTU).

“By promoting Lithuania globally, attracting investments and scientific innovations to Lithuania and its regions, (honorees) are the symbols of patriotism and meaningful leadership,” Nauseda says.

Bryer says the award is one of the most significant personal and professional recognitions he has received.

“My ancestry is Lithuanian on both sides of my family; my maternal grandmother was last to leave in 1938 at the age of 13,” he says. “I was the first in my extended American family to return to Lithuania, a journey I first took in 2014. I feel I am doing what my grandparents and great-grandparents would have supported if they remained in Lithuania. I am honoring their memory by serving my ancestral homeland and my second home.”

While his name might be the one on the award, Bryer says he feels as though he is merely “the face” of it and that the award truly belongs to the exceptional cohort of educators who brought the dual-degree program to life.

Through the students in the program, we will transform the nonprofit sector and nonprofit leadership in Lithuania, and we will create cohorts of global thinkers and doers prepared for public service from UCF."

“In Lithuania, Dr. Eglė Vaidelytė is my chief collaborator on the dual-degree program,” he says. “Many colleagues in the Faculty of Social Sciences, Arts and Humanities at Kaunas University of Technology have embraced me as if I was always a member of the community there.”

He added that Stephanie Krick, senior lecturer and undergraduate academic program coordinator for the School of Public Administration, has also been instrumental in the program’s success.

As for the outlook of the dual-degree program, Bryer says the future is bright despite the setbacks posed by COVID-19 as the groundwork has already been laid and the partnerships have been forged. He says the program is ready to grow – all that it needs are eager students interested in a unique perspective on the public and nonprofit sectors.

“Through the students in the program, we will transform the nonprofit sector and nonprofit leadership in Lithuania, and we will create cohorts of global thinkers and doers prepared for public service from UCF,” he says.

The School of Public Administration’s dual-degree program allows prospective undergraduate students to earn two degrees within a standard four-year timeframe. By completing in the program, which includes spending a semester studying abroad at Kaunas University of Technology in Lithuania, students will receive a bachelor’s degree in public administration from KTU in addition to the bachelor’s degree in nonprofit management from UCF.