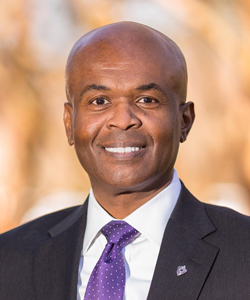 Grant Hayes is the dean of the College of Community Innovation and Education at the University of Central Florida. He is also a Mildred W. Coyle Endowed Professor and Eminent Scholar. Hayes previously served in various leadership roles in UCF’s former College of Education and Human Performance. Before returning to UCF, he served as the interim provost and senior vice chancellor for academic affairs at East Carolina University for three years. Hayes has spent the last 30 years as an innovative leader, educator and administrator who aims to empower faculty and students to seek creative solutions to some of the most pressing higher education issues. He is a professor of counselor education and has served in numerous leadership positions over the span of his career.

Hayes has published extensively, conducting research in a variety of areas such as effective leadership, technological applications in counselor education, counseling children and adolescents, and character/moral development in youth settings. He is a fellow of the American Counseling Association and currently serves on the advisory board of the Carnegie Project on the Education Doctorate. He earned his doctoral, master’s and educational specialist degrees from the University of South Carolina. He earned his bachelor’s degree from Limestone College in South Carolina.