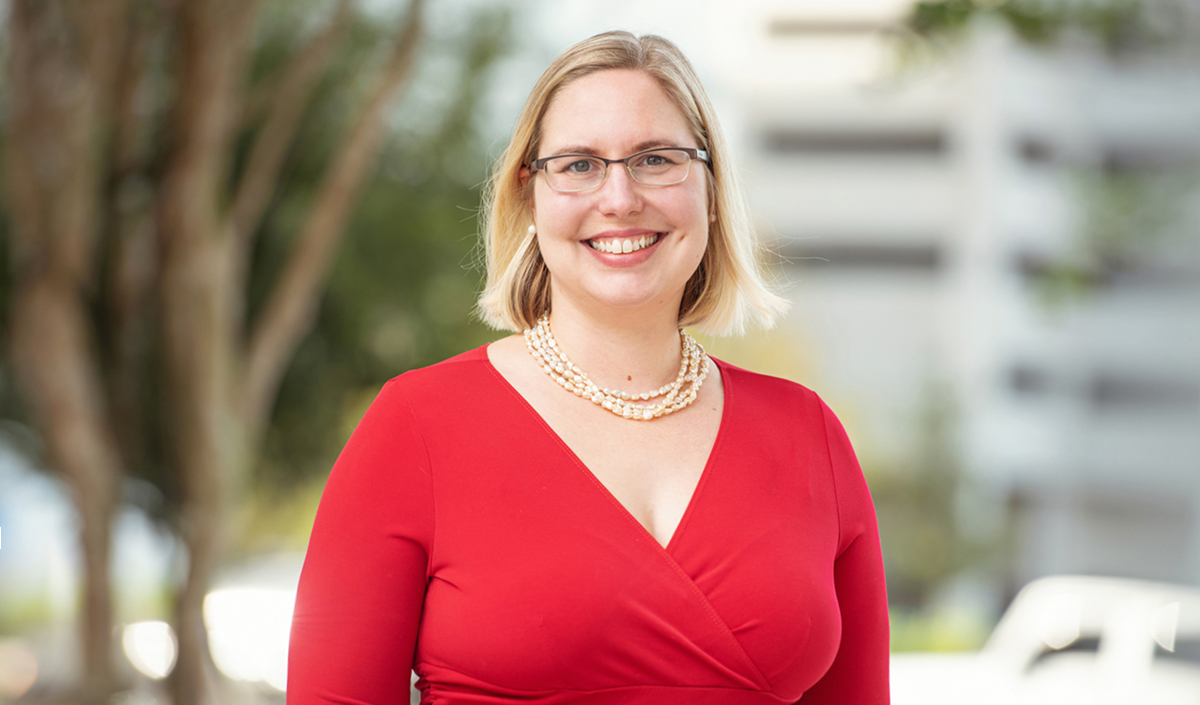 Basia Andraka-Christou, assistant professor of health management and informatics, is looking at the barriers preventing medication treatment for individuals with opioid addiction. (Photo by Amy Floyd)

One in three Americans know someone addicted to opioids. But while widespread, scientific studies show medication-assisted treatments are most effective in reducing opioid addiction-related relapse, incarceration, HIV/AIDS and death, multiple barriers prevent much needed access, according to Basia Andraka-Christou, who is an assistant professor of health management and informatics with a secondary joint appointment in internal medicine in the College of Medicine.

One summer while visiting family in Florida, Andraka-Christou learned that her childhood friend was in recovery for opioid addiction and taking Suboxone for treatment. As a friend, law school graduate, and at the time, doctoral student of law and social science, she looked into the regulations of Suboxone and other forms of medication-assisted treatment (also known as MAT), like methadone and naltrexone.

“I was surprised to find strange, unsettling laws and regulations not aligned with countless studies illustrating their reliability and effectiveness in treating opioid addiction.”

She realized that Suboxone was more heavily regulated than oxycodone or hydrocodone, the two opioids in which her friend was addicted. Unlike pain pills, Suboxone providers had to limit the number of patients they treated and had additional education requirements. She returned to her doctoral program with a new dissertation focus — legal and cultural barriers to medications for treating opioid addiction.

Since then, Andraka-Christou has researched barriers to treatment access within multiple fields of study, including healthcare, criminal justice, history, communications, law and policy, while looking at factors of influence in society, community, relationships, and at the center of care, the individual. But one reoccurring barrier stands out across these factors and fields. Stigma.

“Looking into the social context of belief, I found a lot of stigma related to these medications.”

For example, Andraka-Christou says twelve-step programs like Alcoholics Anonymous and Narcotics Anonymous, the most common methods in America for dealing with addiction, are based on an abstinence-only approach and stigmatize the use of medication-assisted treatments. In addition, only 35 percent of the country’s treatment centers prescribe or allow the use of these medications.

Over time, if you give people the freedom to set their own goals, they are more likely to find a manageable level of use or motivation to stop opioids entirely.

This year, Andraka-Christou says she will incorporate a new element to the discussion in her Case Studies in Health Law course in the Master of Health Administration program; a comparative perspective of regulations in the U.K., France and Russia, which is one of the many topics she explores in her book The Opioid Fix: America's Addiction Crisis and the Solution They Don't Want You to Have, to be published in April of this year by Johns Hopkins University Press.

“Decades ago, each nation started on a different path of addiction medicine regulation with few changes overtime. As a result, laws in various western countries today look very different from each other, even with respect to the same medication.”

Pulling from research at home and abroad, Andraka-Christou looks at ways to apply a harm reduction approach (which is more person-centered than an abstinence-only philosophy) within treatment centers. While historically treatment centers and public policy required abstinence from all drugs, including alcohol, marijuana and medications, a harm reduction approach would be less stringent.

“Harm reduction says, Let’s see what works for this individual. Maybe they can safely use marijuana or alcohol. Or instead of cutting out all opioids, they decrease how much or how often they use. Over time, if you give people the freedom to set their own goals, they are more likely to find a manageable level of use or motivation to stop opioids entirely.”

In an interview conducted for her book, Andraka-Christou spoke with a woman who used to leave her house at 4 a.m. daily to drive an hour and a half to a methadone clinic in a high-crime location, where she then waited in line for an hour with thousands of others for treatment.

“Methadone clinics are often outside of mainstream medicine in this country. Treatment policies limit the number of providers willing to work in these highly regulated clinics, with resource-draining documentation that makes receiving money from insurance companies difficult. Clinics are often located in high-crime areas and stigma causes provider weariness.”

The criminal justice system can also create barriers to treatment. Andraka-Christou says she interviewed a woman who started Suboxone while on probation. She was pursuing a bachelor’s degree and doing well at the time. However, when her drug test results showed Suboxone, her probation officer told her to stop treatment. Eventually, she relapsed a few times and ended up in jail for a week mid-semester. Too embarrassed to tell her professors why she missed assignments and class, she dropped out.

“Even though she’s now been off opioids a long time, I could hear her crying over the phone when she told me her greatest regret was not finishing her bachelor’s degree.

Andraka-Christou says in another interview, a man told her he learned about Suboxone from a friend who was selling it on the street. After taking it to get off heroin, he said he felt normal for the first time in his life.

Andraka-Christou says she will continue her research looking at the barriers to medication-assisted treatment from multiple dimensions, including person-centered care, implementation and dissemination, best practices for treatment within the criminal justice system and state-level opioid overdose prevention policies.

“Because to me, it is all contextualized. Nothing is purely isolated.”