Eric Merriam is an associate professor appointed to the Department of Legal Studies and the School of Political Science.
BY ALEXANDRA SHIMALLA  |  August 4, 2020 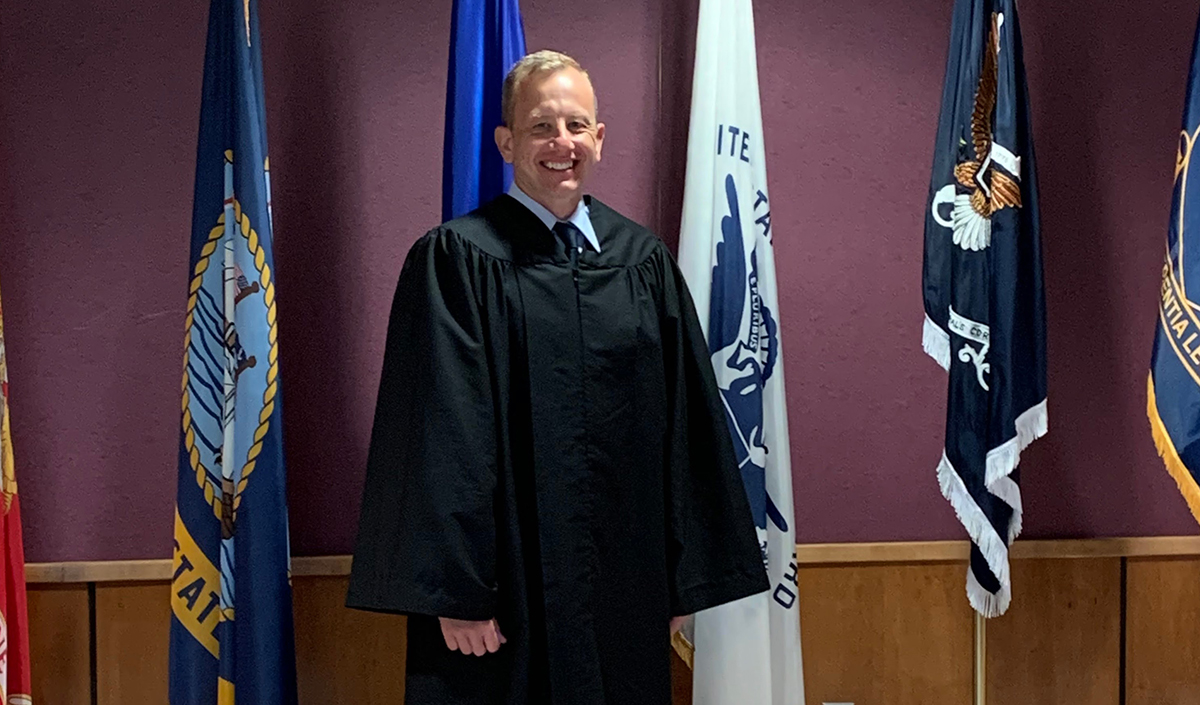 Eric Merriam was recently appointed to the Air Force Court of Criminal Appeals as an appellate military judge.

“I have desks all over the place,” laughs Eric Merriam. “I think I have four right now. I spend a lot of time at those desks.”

Merriam is an associate professor with a joint appointment to the Department of Legal Studies and the School of Politics, Security, and International Affairs at UCF. He’s also a husband and father, UCF’s Moot Court team’s head coach, a new member of the board of directors for the American Moot Court Association, a textbook author and a lieutenant colonel in the Air Force Reserve. After being an active duty member for 14 years, Merriam entered the Reserve in 2015 to continue to serve his country.

In July, Merriam was appointed to his newest duty: He’s now an appellate military judge on the Air Force Court of Criminal Appeals.

“This appointment is a dream come true,” says Merriam. “I think many lawyers, from the time they’re in law school, have visions of one day being a judge. I’m getting to do that in a couple of ways that are unique and make it even better: I’m getting to serve my country; I get to judge while wearing a uniform under my robe; and I get to do it as part of a system that I believe in.”

Merriam joined the Air Force one week before September 11, 2001. Despite not having immediate family members in the military, serving was always a concept he considered when thinking about how to make his life more rewarding and fulfilling, especially while working at a big corporate law firm after he finished law school. The Air Force’s “buffet of legal practice” approach and the opportunity to serve his country both peaked his interest, so he applied for a commission.

The Air Force rotated him around various jobs — all under the duty title of judge advocate — including being a prosecutor, defense lawyer, general counsel of a large hospital and even working at the Pentagon under the judge advocate general. Merriam moved up the responsibility ladder in the military while simultaneously starting over in new areas of law every few years. “It was exciting, but also a little daunting. Every few years, you start a new job where you don’t really know what you’re doing right away,” he laughs.

In his new role as an appellate judge, Merriam is part of a panel of three judges. The group reviews appeals from Air Force courts-martial. Much like in any other court of appeals, Merriam and his fellow judges will review the cases, read through the briefs, possibly hear oral arguments and then issue opinions.

“After a couple decades of practicing and teaching law, I get to be part of making it in the sense of writing judicial opinions that have precedential effect and can influence things for cases to come,” says Merriam, who already enjoys reading judicial opinions and debating legal issues. “It’s a dream come true, honestly.”

Teaching and judging are kind of my ultimate career dreams, so now I just want to get better at both and keep doing them in a meaningful way.

In his role as a faculty member at UCF since 2015, Merriam teaches both legal studies classes — such as moot court (appellate advocacy) and military law — as well as political science classes, like constitutional law and national security law. “Some people say you should ‘practice what you preach.’ I practice what I teach. And now our students can take appellate advocacy from an appellate judge.”

“For a long time, I thought I wanted to be a college professor. I’ve been very interested in academia since college, but never been able to make the shift as I continued professionally,” says Merriam.

While still an active duty service member, Merriam applied to an Air Force program that sent him back to law school to get a specialty Master of Laws in national security law, then assigned him as an assistant professor at the Air Force Academy. “Teaching at the Air Force Academy confirmed for me that this was really what I want to do being — that teaching was my calling in life.”

After he separated from active duty, he left the Air Force Academy and came to Central Florida. “Teaching and judging are kind of my ultimate career dreams, so now I just want to get better at both and keep doing them in a meaningful way,” says Merriam. “Both law and teaching allow me to study and interact with how we as human beings behave and treat each other, and hopefully influence people to reach their full potential. To me, that’s as satisfying or meaningful as a job can be.”

“For me, teaching and judging are the pinnacle in terms of being able to have a real impact on other people’s lives, hopefully making the world a better place than I found it. It’s easy to be motivated to do a lot of work when you think that what you’re doing matters and can help people.”