This semester we had the pleasure of welcoming David Gilford, principal with HR&A Advisors.

Cities across the globe have embraced the “smart city” moniker. From traffic-free streets to sustainable buildings, the potential benefits are tantalizing for mayors, businesses, and residents alike. However, more than a decade into the promised smart city revolution, the reality has been less rosy: rapid technological obsolescence, privacy concerns, and proprietary platforms.

In this lecture, David Gilford will attempt to separate hype from reality, drawing lessons from national-scale initiatives as well as local, community-driven programs. Starting with an examination of the smart city’s evolving and often conflicting definitions, the lecture will introduce approaches that ensure people are at the heart of technology planning.

Throughout the discussion, he’ll also share thoughts the connections between smart cities and economic development, drawing upon his experience at the intersection of the public and private sectors in cities from New York to Orlando. Additional themes include the challenges of balancing startup-speed innovation with government-speed procurement, while planning for equitable and inclusive outcomes.

David Gilford advises public and private sector clients on the use of technology to make cities more livable, sustainable, and responsive. As a Principal with HR&A Advisors, David is developing strategies in support of economic development and inclusive innovation for clients including New York City, the City of Pittsburgh, and the Port Authority of New York and New Jersey.

David previously co-founded and led the Connected Communities practice at Intersection, an urban technology and media company backed by Alphabet’s Sidewalk Labs, where he focused on real estate, airports, and neighborhood development. David has led the creation of digital master plans for over 40mm square feet of mixed-use developments, including Orlando’s Lake Nona Town Center, using technology to unlock new sources of revenue, reduce costs, and improve quality of life.

David previously held leadership positions in economic development with the City of New York, most recently as Vice President for Urban Innovation & Sustainability at the New York City Economic Development Corporation (NYCEDC), where he was responsible for supporting the growth of technology companies addressing key city challenges such as sustainability and transportation. As a Director of the Center for Economic Transformation, he created programs such as Urbantech NYC that support entrepreneurs through incubators, affordable workspaces, and access to talent. David also developed a number of sustainability programs for New York City, including the Green NYC 2025 economic development plan, the RISE : NYC resiliency technology competition, and renewable energy programs that contributed to an 800% growth in the city’s solar capacity.

He has been recognized nationally among the 40 Under 40 Rising Stars in Economic Development, as well as one of New York State's Top Ten Energy Government Leaders. David holds an MBA from the Yale School of Management, and a Bachelor of Arts in Economics from Williams College. 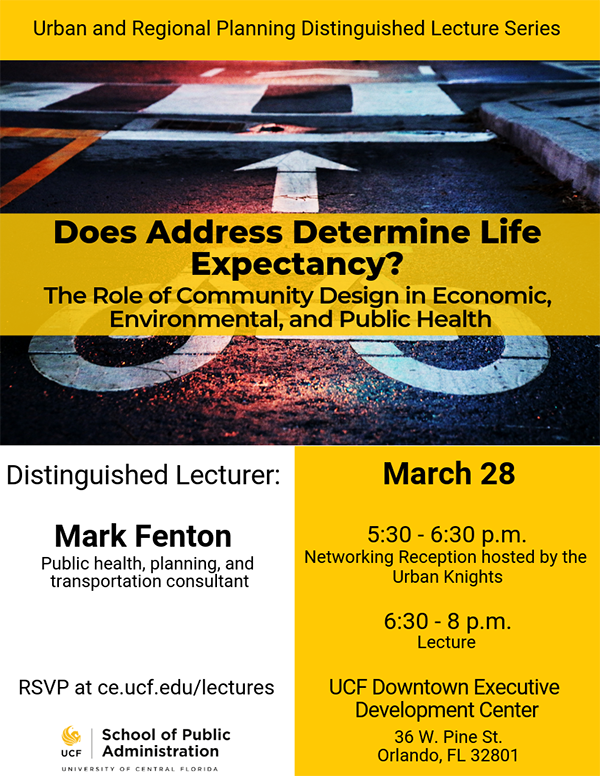 “Does Address Determine Life Expectancy? The Role of Community Design in Economic, Environmental, and Public Health”

Professionals tell us it’s clear that Americans must be more physically active, but it’s also very clear that simply telling people to exercise is not working. Increasingly, planners, engineers, and public works departments are sought as allies in the effort to create “healthier” communities by design. In this thought-provoking and entertaining presentation, Mark Fenton will explore whether there’s any evidence that contemporary planning and design actually matters to community well-being and the related impacts on economic vibrancy and environmental sustainability. He’ll share a handful of practical lessons from over two decades of simply trying to get people to walk and bicycle more.

Mark Fenton is a planning consultant and adjunct associate professor at Tufts University’s Friedman School of Nutrition Science and Policy and former host of the America’s Walking series on PBS television. He has consulted with the University of North Carolina’s National Center for Safe Routes to School and Pedestrian & Bicycle Information Center and has led training and planning processes for pedestrian, bicycle, and transit-friendly designs in communities across the US, Canada, and Australia.

An important conduit for this work is providing technical assistance to communities funded through the Centers for Disease Control and other obesity prevention and community health programs. He studied engineering and biomechanics at the Massachusetts Institute Technology (BS & MS) and US Olympic Training Center, was manager of the Human Performance Laboratory at Reebok, and has published numerous articles and books related to exercise science, physical activity promotion, and the need for community, environmental, and public policy interventions to increase active transportation. 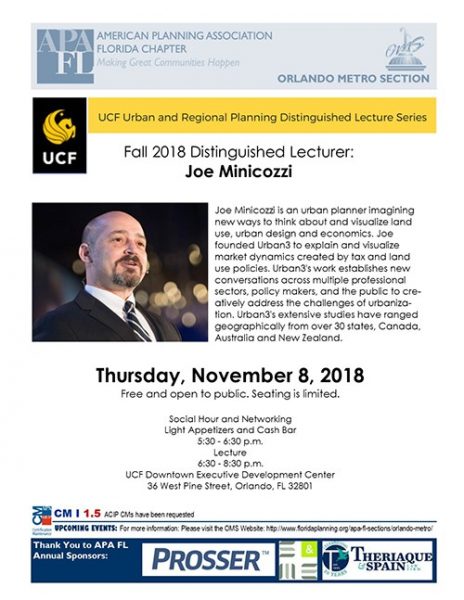 “The Economics of Land Use: Measuring the Dollars and $ense of Cities”

The Fall 2018 lecture featured Joe Minicozzi, an innovative urban economist and planner and founder/principal of Urban3.

Land use economics is an effective tool to understand ways a community can proactively manage growth. It is also a fiscally smart way to use land more wisely. However, few communities consider the important role that the value of land plays in land use planning, zoning, placemaking and capital improvement planning. The goal for Urban3’s lectures is to change the way people think about the cost of development, sprawl and the value of land.

Joe Minicozzi is an urban planner imagining new ways to think about and visualize land use, urban design and economics. Joe founded Urban3 to explain and visualize market dynamics created by tax and land use policies. Urban3’s work establishes new conversations across multiple professional sectors, policy makers, and the public to creatively address the challenges of urbanization. Urban3’s extensive studies have ranged geographically from over 30 states, Canada, Australia and New Zealand. 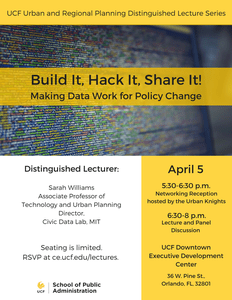 The latest lecture will feature Sarah Williams, an associate professor of technology and urban planning, and the director of the Civic Data Lab at MIT.

Big Data will not change the world unless it is collected and synthesized into tools that generate policy change. The Civic Data Design Lab has developed tools, visualizations, and analyses which helps to facilitate policy change. This talk calls everyone to act on the lab’s motto of “Build It, Hack It, Share It” – by showing examples from lab projects that crowdsource transportation data, capture social media, automate development of zoning envelopes, and use sensors to understand the use of public space. All the projects show that building tools with big data can generate policy change.

Sarah Williams is currently an associate professor of technology and urban planning. She also is director of the Civic Data Design Lab at MIT’s School of Architecture and Planning. The Civic Data Design Lab works with data, maps, and mobile technologies to develop interactive design and communication strategies that expose urban policy issues to broader audiences.

Trained as a geographer (Clark University), landscape architect (University of Pennsylvania), and urban planner (MIT), Williams’s work combines geographic analysis and design. Williams is most well known for her work as part of the Million Dollar Blocks team which highlighted the cost of incarceration, Digital Matatus which developed the first data set on an informal transit system searchable in Google Maps, and a more a recent project that uses social media data to understand housing vacancy and Ghost Cities in China.

Her design work has been widely exhibited including work in the Guggenheim, the Museum of Modern Art, the Cooper Hewitt Museum in New York City. Before coming to MIT, Williams was Co-Director of the Spatial Information Design Lab at Columbia University’s Graduate School of Architecture Planning and Preservation. Williams has won numerous awards including being named top 25 planners in the technology and 2012 Game Changer by Metropolis Magazine. Her work is currently on view in the Museum of Modern Art and the Seoul Biennale Cities Exhibition in Korea.